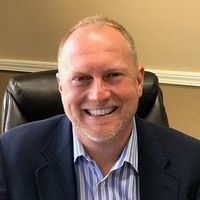 Terry Stanfill started his career at the time of the 1987 stock market crash. He spent the first ten years of his career at First of Michigan Corporation working with his ever-growing clientele. After a competitor purchased the firm, he decided to join another NYSE firm, Hilliard Lyons. There he spent the next 6 years refining his skills in the ever-changing market environment as an advisor, as well as taking on the role of branch manager. In October 2003, Terry joined with 3 others to start RLM Financial Services, Inc.

Currently, he owns and operates the RLM office, alongside his business partner Mark Smith, in Grand Blanc, MI. This office opened January 1st, 2009.  In 2019, they built a brand-new building in downtown Grand Blanc.  They hope to call this new location home for the business and all its clients for decades to come. RLM Financial Services serves hundreds of clients on an ongoing basis.

Terry is a graduate of the University of Michigan – Flint Campus.  In addition, he has completed multiple courses of study at the Securities Industry Institute through the Wharton School of Business.

Terry is a receipent of the of the AAMS designation, Accredited Asset Management Specialist, through the College for Financial Planning. He is also a former Professor at Detroit College of Business. Terry has appeared on several local newscast programs to discuss the market and the impact on the general community and has done numerous daily market commentaries for radio stations throughout the state of Michigan.

Not only does Terry assist individuals, he also offers corporate financial analysis counseling; including cash flow and expense containment.

In the past and present, Terry sits on various non-profit boards.

Terry holds a FINRA Series 7, 9, 10, and 63 Securities Registrations, as well as Life and Variable Contracts Insurance Licenses in numerous states.  In addition, he became a FINRA Dispute Resolution Arbitrator on January 4, 2012.

Terry is a is a registered investment advisor representative with Grove Point Advisors, LLC and has been continuously since 2003.